item in your basket

Get the Samsung Galaxy A02s 32GB/3GB best price in Kenya

The Samsung Galaxy A02s 32GB/3GB is a budget smartphone with the Android 10 operating system. The phone comes with a 6.5-inch TFT display with a 5MP front camera, and on the rear side, it sports a 13MP triple camera with an LED flash. For performance, a Snapdragon450 chipset blows life into the phone. Galaxy A02s is backed by a 5,000mAh battery with fast charge support. Let’s read more about the Samsung Galaxy A02s full specification in detail and see how it performs. Samsung Galaxy A02s comes fitted with a 6.5-inch color TFT display. This multi-touch panel has a resolution of 720x1520px with a pixel density of 295PPI on a 19:9 aspect ratio panel. The screen has a fair size and with the given PPI, you can expect visuals to be sharp and clear. Also, like most entry-level phones, it also has thick borders all around it. Galaxy A02s brings 13MP triple-rear cameras backed by an LED flash. The primary 13MP camera is coupled with two other 2MP’s of macro and a depth camera. It supports features like digital zoom, auto flash, face detection, and touch to focus. Decent camera performance is expected from the phone. As far as the selfies are concerned, there’s a 5MP inside the notch. For recording, you may record FHD 1080p videos @30FPS. Galaxy A02s runs on the Android 10 operating system out of the box. The smartphone gets assistance from a 14 nm-based entry-level Snapdragon450 SoC with a 1.8GHz octa-core processor. For rendering the graphics system on the phone, there’s an Adreno 506 GPU that sits with 3GB of RAM for better multitasking activities on the phone. The smartphone lacks a fingerprint sensor but comes along with an accelerometer, light sensor, and proximity sensor. Galaxy A02s gets charged from a big 5,000mAh Li-Ion battery underneath. It supports fast charging and comes with a 15W charger out of the box. The battery size seems average but judging upon the screen size it seems fair. Also, a typical day of battery life is expected under average usage on the phone. 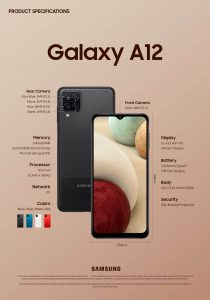 Galaxy A02s comes with 32GB of internal storage space for stuffing apps and games. Also, the phone has an extra-card slot that expands the storage capacity using a micro-sd card. This makes more room for photos, music, videos, documents, and other files. Samsung Galaxy A02s has the usual sets of connectivity options that include 3G, 4G, and VoLTE that enable HD voice calls and video calls on supported Jio networks. It has WiFi, Bluetooth, and MicroUSB v2.0 with OTG and charging support. For online navigation, it supports GPS with A-GPS.

Start Chatting
1
Chat with us for help
Powered by
This Samsung Galaxy A02s 32GB/3GB can be yours for only KSh13,999!
If you have any questions, chat with us now.